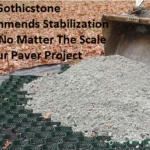 Why we recommend stabilization grids no matter the scale of your paver project.

Written by The Stonehunter on February 24, 2021. Posted in Blog, Failed Installations, FAQs

Yes, even for the backyard pool deck or patio pavers The need for stabilization grids is something that is largely unrecognized throughout the construction industry which sort of boggles the mind.  I would say that the large-scale industrial masonry world is understood because they have heavy-duty architects working on road projects, etc. those that require forethought, and longevity.  Unfortunately, on the mid-size to small scale projects ie: from parking lots to a backyard patio or pool paver projects, it’s usually not a consideration for reasons that are not understood by me.  Stabilization is at the heart of the project when it comes down to longevity of the installation.   Anybody can lay down some stone or pavers on soil or grass or anything and they’ll stay there for a week, a month or a year, but if you want them to stay in place for 10, 20, 50 years, you[...]

Written by The Stonehunter on February 22, 2021. Posted in Blog, FAQs, Travertine Pavers

The use of spacers is not necessary particularly when dry setting these pavers.
No sealing or maintenance is required. Natural rain will flush and clean the stone.
Same installation methods and considerations, like other decorative pavers, should be employed including using a pad on your vibrating plate.
See our blog posts for specific considerations ie:  Battling Mother Nature, Part I, mold/algae problems, https://www.gothicstone.com/how-to-battle-mother-nature-part-i/

Written by The Stonehunter on December 20, 2017. Posted in Blog, FAQs, Pool coping

Gothicstone has designed a new coping edge profile that has a flat face with “quarter round” bullnose on the top corner and “eased edge” on the bottom. It’s 2″ thick, but LOOKS THICKER because the face is flat, an optical illusion that is very desirable. 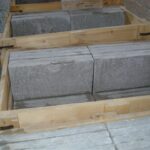 Why do we say Limestone is ‘superior’ to  Bluestone? Compare the attributes….
1) Limestone has NO METAL (practically speaking), unlike traditional Bluestone from upstate PA/NY that is very laden with natural metal content….

1a) that means it STAYS COOL EVEN IN DIRECT SUNLIGHT. That’s right, since it has no mechanism (metal) to draw the heat into the body of the stone it is THERMALLY INERT! It’s a thermal insulator, rather than a thermal conductor!

1b) it is chemically inert to chlorine and salt….. NO Chemical REACTION!  Since LIMESTONE and Travertine Limestone are composed of Calcium Carbonate (chemically similar to a salt itself)…..it doesn’t react with salts or chlorine!

2) It is faster and easier to install than Bluestone….

2a) Gothicstone products are produced on marble tile production lines to exact specifications, thereby resulting in a extremely squared and calibrated end product (try comparing that to Bluestone, which is hacked up on very basic saws that[...]

Written by The Stonehunter on August 4, 2014. Posted in Blog, FAQs

Q: What is the difference between travertine, limestone and marble?
A: Limestone is the youngest of all these stones. Actually, limestone is a sedimentary stone usually found in ocean beds. Typically, limestone is not very interesting however, most of the buildings around the world (ie: Washington, DC, Empire State Building) have been built with sedimentary limestone. It is the most common building material in the world. Travertine is a type of “morphed” limestone but it is created from Artesian wells which means lime has been deposited by water. Travertine makes an excellent use for any indoor or outdoor area because it never gets hot (no metal content in the stone), it is twice the strength of concrete and is non-slippery. Travertine is durable for any application both commercially and residential – it is about 50 million years old. Marble, on the other hand, is about 100 million years old and is[...]

Q: What sizes do the columns come in?
A: The columns, in Cream and Noce colors, come in three standard sizes and include a capital and base: 40″ tall and 6″ diameter; 47″ tall and 8″ diameter; 95″ tall and 10″ diameter. Any other size can be custom made per your specifications.

Q: What is the Gothicstone Paver?
A: Gothicstone Pavers are antiqued travertine, limestone, marble or Zebstone pavers and are used for outside walkways, driveways, patios and pool decks. The pavers are available in 25+ diverse natural colors and finishes. They are standard in the French pattern where there are 4 sizes that create the pattern: 8×8, 8×16, 16×16, 16×24; they are 3cm thick. Other standard size is 6×12 honed and chiseled. The Gothicstone Pavers are installed the same way as other dry-set pavers. They require no maintanence, no sealers, they conform to ASTM (American Standard for Testing Materials) testing for non-slip and freeze-thaw. They also stay cool underfoot(except lava). Perfect for the pool deck and outside patio areas. Dimensions: 4×4 to 48×48; custom sizes also available.

Subscribe to our newsletter for technical & product information as well as design and trends.

Wholesale to the Trade Only